Callie, just where is Cageville, Tennessee? What is your home like?

The town of Cageville is in western Tennessee. It was named for Licurgus Cage, one of our first merchants. The town became known as Alamo in 1869. They renamed it as a memorial to folks who died at Battle of the Alamo—and to Davy Crockett.

Our farm is about a mile outside of town. We don’t have any close neighbors, just lots of trees near our cleared fields. Empty now, except for an acre plot that I planted to keep us from starving. I hope it’s too small for the Yankees to notice it much.

The biggest city nearby that you might have heard of is Jackson. I’ve never been there, but Louisa—my sister—and I told our comrades that we came from a place outside of Jackson. We didn’t want the other soldiers to find out where we were from and tell our pa where to find us.

What are the living conditions like where you are at this point in the war?

Oh, things are bad. After the Yankees took our crops, Pa stopped planting. Said he wasn’t going to plow and plant just so the Yankees could steal it from us.

Louisa works at the mercantile. They pay her in food so that helps. I planted a garden, hoping the Federal soldiers that ride by our farm don’t take notice of it. It’s not much, but that food should keep us alive this winter.

Other folks in town are doing about the same as us.

I hear your pa is a Confederate ranger. What are he and the Confederate soldiers fighting for? And has it been worth the toll it’s taken?

Yep, Pa is too old for soldiering, but he found a way to fight for his country. He and his friend, Ezra Culpepper, joined a cavalry guerrilla group. They go out on missions and then come home, pretending to be nothing more than average citizens while in town.

I know the South needs all the help they can get to win this war, but I hate what being a ranger has done to my pa. He never used to drink like this. I think he drinks to forget about those missions.

Are you really engaged to your pa’s friend? Rumor has it that your heart belongs to someone else!

No! I’m not going to marry a man thirty years my senior, no matter what Pa agreed to on my behalf. Pa’s mind is made up so I have to figure out something.

I love Zachariah Pearson. Zach never courted me before the war and now the fighting is about all he thinks of. But I’m the only girl in town he writes to—I know because I asked all the other single ladies. That makes me special, doesn’t it?

Tell us something about your true beau, Zach?

Oh, what I could tell you about Zach. We’ve been friends since his aunt and uncle took him in after his parents drowned. That was when he was fourteen, eight years ago. It was a tough time for him. He and his cousin, Nate McClary, grew as close as brothers.

Zach is a handsome man, especially in his Confederate gray. I love his green eyes and the way his brown hair curls right before it gets cut. I always thought he might court me … and then the war started. He trained at Camp Trenton in September of 1861. I’ve only seen him on his furloughs since then.

How would you describe yourself?

Oh, I’m not much to look at. Louisa takes after Ma. With her blue eyes and blonde hair, she’s the real beauty of the family. She knows it, too.

I got my auburn hair from Pa. His brown eyes, too. My hair is curly so I have to keep it pinned in a bun on top of my head. Wish I was pretty, though. Maybe Zach would notice me.

How do you plan to avoid marriage to your pa’s friend and how does your sister, Louisa, fit into all this?

Oh, Louisa’s got a plan. She’s the adventurous one. She’s been reading newspaper reports about women disguising themselves as Confederate soldiers. She’s been after me to muster into the army to avoid marrying Mr. Culpepper.

But Louisa has her own reasons for joining the army. She’s heard reports that her fiancé, Nate McClary, has been flirting with other women. I don’t want to think badly of him … but I’m afraid the reports are true.

Aren’t you worried your disguises might be found out? What will you do if that happens?

Louisa and I have done our best to disguise ourselves as men so we can muster into the army. I’ve sewn trousers, coats, and blouses for both of us. Louisa sewed padding onto our underclothing to hide our shapes. Our blouses and coats fit loosely so that should help. 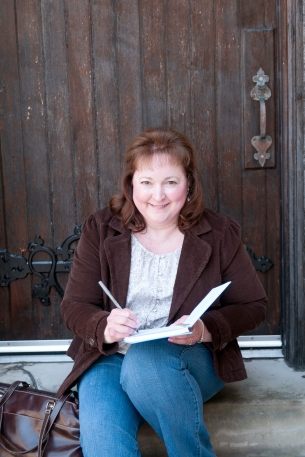 Award-winning and Amazon bestselling author Sandra Merville Hart loves to uncover fascinating historical facts for her stories. Her debut Civil War Romance, A Stranger on My Land, was IRCA Finalist 2015. A Rebel in My House, set during the historic Battle of Gettysburg, won the 2018 Silver Illumination Award and second place in 2018 FHL Readers’ Choice Award. A Musket in My Hands, where two sisters join the Confederate army with the men they love, released November 8th. Her novella, Surprised by Love in “From the Lake to the River” released in September of 2018. Trail’s End, in “Smitten Novella Collection: The Cowboys” releases in August of 2019.

Find her on her blog, https://sandramervillehart.wordpress.com/.

View all posts by Kathleen Rouser