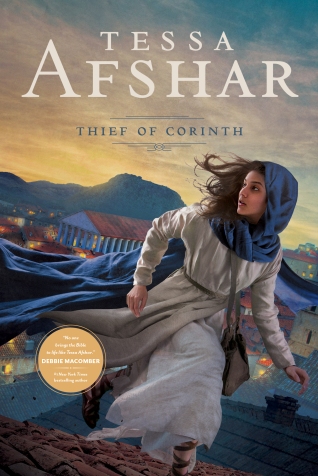 We are sitting down this morning for a latte and chocolate cake with Ariadne of Corinth, who is the main character from the book Thief of Corinth. Ariadne has never tasted coffee or chocolate. How do you like your first taste?

Ariadne (swallowing a large mouthful): I am sorry. I am too distracted to conduct an interview. How did we survive in the first century without these delicacies?

Interviewer: I feel for you. So you are from the first century. Can you tell us a little about yourself?

Ariadne: I was born in Corinth, but when I was eight, my mother divorced my father and took my brothers and me to Athens to live with our grandfather. Like my grandfather, Athens was strict and conservative. Life became intolerable when my grandfather threatened to marry me to a cruel man. So I ran away to join my father in Corinth.

Interviewer: We are told you won an award. Could you tell us a little about that?

Ariadne: I ran the short race in the Isthmian Games and was declared a champion. The Isthmian Games were similar to the Olympic Games, though they were slightly smaller. In the footraces, men and women competed against one another. (Washes down an enormous mouthful of chocolate cake with a gulp of latte.) I fear I might not have managed that feat if we had this ravishing pastry in my time.

Interviewer: Was it common for women to participate in national games?

Ariadne: In Corinth where the Isthmian Games were held, there was more tolerance toward female athletes, though it was unusual for women of good families to participate.

Interviewer: Speaking of unusual, you open your story by mentioning that you are a thief. Surely that is not a common occupation for women of good family either.

Ariadne: That is true. I convinced myself it was the only way I could help my family. It is not a chapter of my life I am proud of. But I admit it was an exciting time.

Interviewer: You fell in love in the midst of difficult circumstances.

Ariadne: Didn’t one of your famous poets say that “the course of true love never did run smooth?”

Interviewer: His name was William Shakespeare.

Ariadne: He was a wise man. There were many obstacles in our path that had to be overcome. I confess, some of those obstacles were of my own making.

Interviewer: Speaking of wise men, what did you think of the Apostle Paul when you met him?

Ariadne: I did not like him. He annoyed me with all his talk of love being patient and kind. My brother Dionysius was very fond of him, which only annoyed me further. (The physician Luke wrote the story of how Paul met my brother in Athens in his famous tome called Acts.) In time, I came to realize that Paul was a brilliant man. I finally understood that I needed the unfailing love of his God more than anything.

Interviewer: What did you think of Tessa Afshar, the scribe who wrote down your story?

Ariadne (polishing off the cake): She can’t run to save her life, poor thing.

Interviewer: Why did you want her to tell your story?

Ariadne: I wanted the scribe to talk about the lingering wounds of divorce. My parents’ divorce left a mark in my life that affected me for many years. Because of the divorce, my father was absent from our lives, and my mother grew hard and distant. I tried to fill that void in my life by trying to win affirmation, affection, and admiration.  In spite of all my efforts, I found that love fails; it is imperfect and broken. Paul and my brother Dionysius taught me that the sole solution to all my struggles was God Himself.

To read Ariadne’s full story, look for Thief of Corinth by Tessa Afshar.

Tessa Afshar is the award-winning author of historical and biblical fiction whose work has received the prestigious Christy and Inspy Awards. Her novel, Land of Silence was chosen by Library Journal as one of top five Christian Fiction titles of 2016, and nominated for the 2016 RT Reviewer’s Choice Award for best Inspirational Romance. Her book, Harvest of Rubies was a finalist for the 2013 ECPA Book Award in fiction, and chosen by World Magazine as one of four notable books of the year. Tessa was born in the Middle East to a nominally Muslim family, and lived there for the first fourteen years of her life before moving to England and eventually settling in the United States. Her conversion to Christianity in her twenties changed the course of her life forever. Tessa holds an MDiv from Yale University where she served as co-chair of the Evangelical Fellowship at the Divinity School.